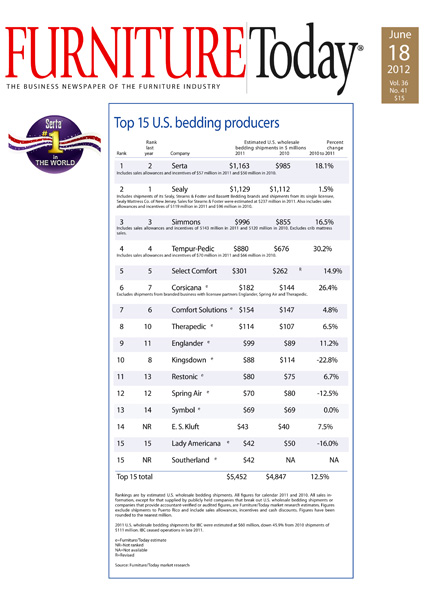 A four-way battle for bedding supremacy is brewing in the highly competitive mattress arena.

As reported last month, Serta® has unseated longtime do-mestic champ Sealy and now ranks as the largest U.S. bedding producer. Serta® earned that top spot on the heels of an 18.1% shipments gain last year, far ahead of Sealy’s lackluster 1.5% growth rate that year. Sealy is No. 2 after decades as the unquestioned sales leader.

And Sealy now finds itself pressed by three fast-growing producers. No. 3 Simmons managed to compile almost as strong a year last year as Serta®. Simmons boosted its shipments by 16.5% and fin-ished the year with U.S. ship-ments of $996 million — just $133 million behind Sealy.

And No. 4 Tempur-Pedic posted the strongest growth of any Top 15 bedding pro-ducer last year, boosting its shipments by 30.2%, to $880 million.

Those are some of the highlights of Furniture/To-day’s ranking of the Top 15 U.S. Bedding Producers, an exclusive look at the perfor-mance of bedding’s top man-ufacturers.

In addition to the change at the top of the rankings, this year’s list is notable be-cause it marks the entry of two new players to bedding’s pantheon of elite players. E.S. Kluft & Co., headed by luxury bedding aficionado Earl Kluft, enters the rank-ings for the first time ever, in the No. 14 position. And in-dependent bedding producer Southerland also cracks the list for the first time, tying with Lady Americana at the No. 15 position.

Figures for the rest of the companies on the list — Corsicana, Comfort Solu-tions, Therapedic, Englander, Kingsdown, Restonic, Spring Air, Symbol, Lady Americana and Southerland — were de-veloped by a Furniture/Today survey of producers, analysts and suppliers. All of those companies are privately held and did not provide audited or accountant-verified fig-ures.

The Top 15 list shows an-other strong year for Tempur-Pedic and Select Comfort, the two specialty sleep producers that continue to stand out with aggressive advertising and marketing programs. As noted, Tempur-Pedic led the entire Top 15 field with its 30.2% shipments growth, while Select Comfort did well with its 14.9% growth in ship-ments.

Another standout is No. 6 Corsicana, the promotional bedding powerhouse based in Corsicana, Texas. It saw its shipments jump 26.4% last year, to $182 million. (That figure does not include the Therapedic, Englander or Spring Air branded business that Corsicana’s Sleep Inc. unit generates.) Overall, the Top 15 bed-ding producers grew by 12.5% last year, well above the over-all industry growth figure of 7.7% reported by the Interna-tional Sleep Products Assn. No. 7 Comfort Solutions, displaced in the No. 6 spot by Corsicana, had a 4.8% gain in shipments last year, with total shipments of $154 mil-lion, according to Furniture/Today’s survey of producers, analysts and suppliers. No. 8 Therapedic, which moved up two spots from the previous year, saw its ship-ments grow by 6.5%, to $114 million, according to the Fur-niture/Today survey. No. 9 Englander joined the Top 10 list on the strength of an 11.2% gain in shipments, to $99 million.

Complete Synergy for Your Comfortable Living

SERTA®, the Best Bedding Manufacturer in the World